Love is a game of chance, and sometimes you lose.  We gamble with our hearts, our sanity, our trust, and when love is lost, we are left with feelings of emptiness.  We are left with holes of what once was and the distant hope of what was to become.  Rascal Flatts’ “Holes” may not have been one of their biggest hits from their album Feels Like Today (2004), but it stands out on the album mainly comprised of upbeat, high energy songs.  “Holes” exhibits the band’s ability to deal with real emotions and lead singer Gary LeVox’s powerfully emotive voice and portrayal of the pain someone experiences when they are left with nothing but a hole, a remnant of the past that lingers never to be forgotten.

The song begins with a description of what holes are left in the narrator’s life: “three in the hall from those pictures in the closet; two in the bedroom from that night I lost it; and one deep inside me determined to stay”.  The holes in his life are represented by emptiness, anger, pain and isolation.  Each of the holes are slightly different, but they all hurt in their own way.  LeVox’s voice has a unique tremble and vulnerability that portray the weakness and desperation that he is feeling in this moment of loss. Although he stands out as different and, in some instances, “not country” because of his pitch, LeVox’s voice pierces through in controlled cries of pain and isolation.  The song would not have had the same effect if it had been sung in a lower register because LeVox has the emotive ability to be powerfully weak which cannot be found in many country artists of the early 2000’s.

“Holes”, as a lyric, paints many different pictures that all encapsulate what it feels like to experience heartache.  A hole is dark, cold, isolating; a hole surrounds you and is yet nothing at all, a lack of something that once was.  The pain and the sadness that the narrator is experiencing has taken a hold of his life by being a constant reminder that never seems to fade away. According to new evidence, “the brain actually triggers sensations that you also feel in times of “real” physical pain, making heartbreak truly, physically painful” (Kraft).  The song not only aims to show emotions but to also show the pain of loss and the hole left behind.  To be “falling back into” a hole stimulates ideas of death, pain, loss and desperation.  His love was deep enough that without her in his life, he can no longer continue as the same person.  The part of his life that was defined by love and a relationship has died and been lost.  Because the narrator says “these holes left by you”, we can also assume that the loss of this love came as an abrupt surprise and the decision was hers.  The narrator initially has feeling of desperation and anger to try to regain what once was but soon realizes that he is left with holes left to fill in by himself.

The second verse highlights the speaker’s moments of weakness as he resorts to alcohol and falling upon his knees to understand what has happened.  The alcohol “never hits bottom” and never fills the void that is left; yet, he sits and tries to understand what went wrong and “his problems”. In contrast to the beginning of the song, which strongly reinforced that this pain was because of the woman who left him, at this point in the song the audience is first beginning to see that he takes some blame in what has occurred to tear these two people apart.  In order to connect to the audience, it is important to have a moment of reflection in the song.  If the song was solely focused on hurt and blame, I believe it would have quickly turned people away from it because many people have been on either side of the situation, and in either case, a release of negative emotions is the only way to get over a hurt as tragic as heartbreak. 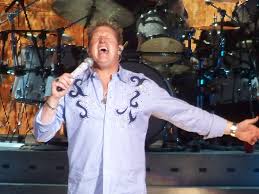 The bridge functions as the realization of what has truly occurred; these holes that are left to be filled in have been dug by himself.  The bridge begins with clear biblical illusions: “There’s two through my hands and one through my feet; from this cross that I bare to the day that I see”.  The illusion to Jesus Christ on the cross seems to be extreme for these circumstances; however, the speaker bares the weight of the potential of a failed relationship as he slowly comes to the realization that the “blame” and the “shame” are his own.  The stigmatic holes he speaks of are borne as a mark of disgrace.  He is able to see truth that has been hidden by his self-pity and desperation as he grieved the loss of love.

As the song comes to a close, it ends with a repetition of the lyric “left by you” multiple times followed by a long instrumental including soft echoes of “left by you”.  The emotionally charged delivery from the vocalizations of LeVox to the stylized harmonies of the trio persistently remains at a relatively fast tempo for the thematic elements of the song with minimal fluctuations of the up-beat instrumentation.  I believe that the instrumental break and the repetition of “left by you” with a slightly different emphasis symbolizes a time of self-reflection and realization that no matter how much time passes that the holes and memories will still remain.  The audience is also able to use this instrumental break to reflect and connect with the song lyrically.  It is rare that a song makes you stop and think, but with this unique ending to the song, the artist gives you the ability to fully understand the depth of the pain and the transition that the speaker has made throughout the progression of the song.

Rascal Flatts was able to take a song that they did not write and beautifully tell a sad story that many people know too well. Although they have been criticized for not writing all of their own music, Rascal Flatts led by the engaging voice of lead singer LeVox enraptures their audience.  You start getting into trouble as an artist when you say, ‘We’re only going to record things that we’ve written,’ especially when you live in a town where some of the greatest songwriters in the world live,” LeVox told Billboard’s Tucker. “Our egos aren’t the ones speaking. It’s our hearts” (Trickey) To tell a story of heartache is difficult, but not portray sadness in this way and bring the lyrics and feelings of so many people to life is a feat to be admired.