Miranda Lambert’s first hit single, “Kerosene,” jump-started her career as an award winning female country artist. The single reached number 15 on the Billboard US Hot Country Songs and achieved Platinum status in the US as well. The song has become a cheating and/or break up anthem for country music audiences, mainly female, with its fiery and kickass attitude. “Kerosene” helped to lay the foundation for Miranda Lambert’s current image and reputation as one of the country music artist “girl power” leaders.

Many people have noticed that Lambert’s single resembles Steve Earle’s “I Feel Alright” (Brown). The melody and instrumentation is probably the most prominent similarity because the tune is recognizable right at the start. Earle also has a line that ends with “smoking gun” and one that ends with “Ha!” just as Miranda Lambert does. Although she received some backlash for this, the similarity between the two songs comes as no surprise. Steve Earle happens to be one of Lambert’s biggest idols, and being that she entered the music scene at such a young age, Miranda most likely used her idols as inspiration to reach those audiences, as many young artists do. This helped Lambert to enter, not only the country scene as a respected artist, but also gain a fan platform within the rebel country/country rock subgenres.

It should be noted that when Lambert wrote this song she was an up and coming small performer, who was trying to build a foundation for her fan base. Earle at the time was at the peak of his career. As a new artist, Lambert would have wanted to make a songs similar to those of her idols so that she could reach those audiences. It is interesting that now Lambert is at the height of her career, while many people probably don’t know who Steve Earle is.

“Kerosene” focuses on a woman who recently found out that her boyfriend has been cheating on her with another woman. The narrator of the song realizes he’s the last straw; she’s had it and isn’t going to put up with it anymore. The last line of each stanza, “I’m givin’ up on love, cause love’s given up on me,” portrays the “screw it” mentality of the broken hearted woman, which most people (not only women) can identify with, especially post breakup. This song is easy to relate to for many because it can be perfectly associated with the feelings of anger that come after a bad breakup, or any breakup really. The woman is furious, upset, and hurt so she just wants to do something rash and be done with love. The impulsive urge one gets after a breakup is best described by Miranda Lambert’s lines, “I started smokin’ cigarettes there’s nothin’ else to do I guess. Dusty roads ain’t made for walkin’, spinning tires ain’t made for stoppin’.” These lines perfectly exemplify the need to do anything that will make a person feel better or get his/her mind off of it.

Lambert is able to effectively get these feelings across to her listeners with her use of song form. “Kerosene” is written in AABA form, meaning it has three verses (A) and a bridge (B). Neal states, “In many cases, an AABA song form is not long enough to be a good country recording.” However Miranda Lambert is able to disprove this, as her single only consists of one pattern of the AABA form and was very successful. One of the biggest reasons for this success was the use of instrumentation. While her vocals and lyrics are the main focus of the song and the effect it has on audiences, the upbeat, rapid tempo and aggressive style helps to portray the emotions of the artist even more.

Clarity and Style also play big parts in the song’s impact on the listeners. Miranda Lambert uses directness, encompassing accessibility and precise, familiar language. “Kerosene” can be classified as a mix between plain and middle style. This means it has moderate figuration and is somewhat more aesthetic. However, it also clear and avoids elaborate sentence structure. The drawbacks of this is that it can come off as somewhat obscure to the audience, “trade the truth in for a lie, cheatin’ really ain’t a crime,” is a great example of this. Despite the obscurity, figurative lines leave more room for the listeners’ interpretations. 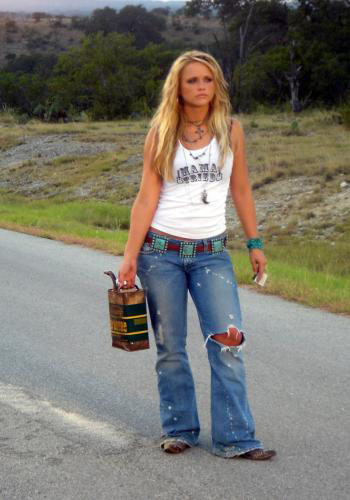 bert’s Delivery is arguably one of the biggest reasons for this song’s success and likeability among country music fans. She sings with strong, solid vocals to build up the idea of the main female character. However, the majority of the song is delivered as a monologue. Lambert uses a speaking voice for most of the song, which is arguably the reason why her attitude is so effective and clear. This attitude and feisty-ness is also shown by the changing pace of certain lines with staccato style and then drawing it out. For example, “light ‘em up and watch them burn, teach ‘em what they need to learn. Ha!”

Lambert’s standup morals and fiery attitude are one of the biggest reasons why she is so popular today. Her fans are able to easily support her because she stands up for what she believes in with no looking back. Others find her extremely likeable and relatable because she sings about real life and does not sugar coat anything. Miranda Lambert’s “Kerosene,” helped her to develop this image for the rest of her career.